The Collision Monitor is a node providing an additional level of robot safety. It performs several collision avoidance related tasks using incoming data from the sensors, bypassing the costmap and trajectory planners, to monitor for and prevent potential collisions at the emergency-stop level.

This is analogous to safety sensor and hardware features; take in laser scans from a real-time certified safety scanner, detect if there is to be an imminent collision in a configurable bounding box, and either emergency-stop the certified robot controller or slow the robot to avoid such collision. However, this node is done at the CPU level with any form of sensor. As such, this does not provide hard real-time safety certifications, but uses the same types of techniques with the same types of data for users that do not have safety-rated laser sensors, safety-rated controllers, or wish to use any type of data input (e.g. pointclouds from depth or stereo or range sensors).

This is a useful and integral part of large heavy industrial robots, or robots moving with high velocities, around people or other dynamic agents (e.g. other robots) as a safety mechanism for high-response emergency stopping. The costmaps / trajectory planners will handle most situations, but this is to handle obstacles that virtually appear out of no where (from the robot's perspective) or approach the robot at such high speed it needs to immediately stop to prevent collision.

The Collision Monitor uses polygons relative the robot's base frame origin to define "zones". Data that fall into these zones trigger an operation depending on the model being used. A given instance of the Collision Monitor can have many zones with different models at the same time. When multiple zones trigger at once, the most aggressive one is used (e.g. stop > slow 50% > slow 10%).

The following models of safety behaviors are employed by Collision Monitor:

The zones around the robot can take the following shapes:

The data may be obtained from different data sources:

The Collision Monitor is designed to operate below Nav2 as an independent safety node. This acts as a filter on the cmd_vel topic coming out of the Controller Server. If no such zone is triggered, then the Controller's cmd_vel is used. Else, it is scaled or set to stop as appropriate.

The following diagram is showing the high-level design of Collision Monitor module. All shapes (Polygons and Circles) are derived from base Polygon class, so without loss of generality we can call them as polygons. Subscribed footprint is also having the same properties as other polygons, but it is being obtained a footprint topic for the Approach Model. 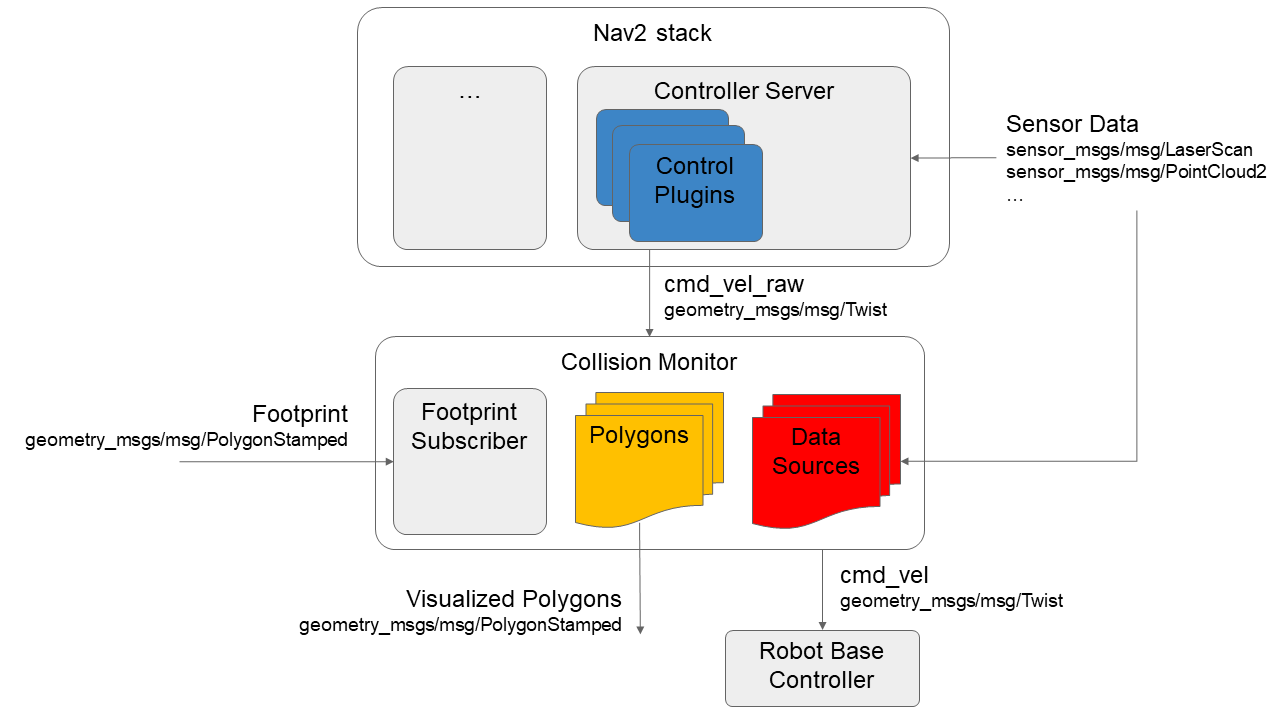 Designed to be used in wide variety of robots (incl. moving fast) and have a high level of reliability, Collision Monitor node should operate at fast rates. Typical one frame processing time is ~4-5ms for laser scanner (with 360 points) and ~4-20ms for PointClouds (having 24K points). The table below represents the details of operating times for different behavior models and shapes:

The following notes could be made: