The Theta Star Planner is a global planning plugin meant to be used with the Nav2 Planner Server. The nav2_theta_star_planner implements a highly optimized version of the Theta* Planner (specifically the Lazy Theta* P variant) meant to plan any-angle paths using A*. The planner supports differential-drive and omni-directional robots.

For the below example the planner took ~46ms (averaged value) to compute the path of 87.5m - 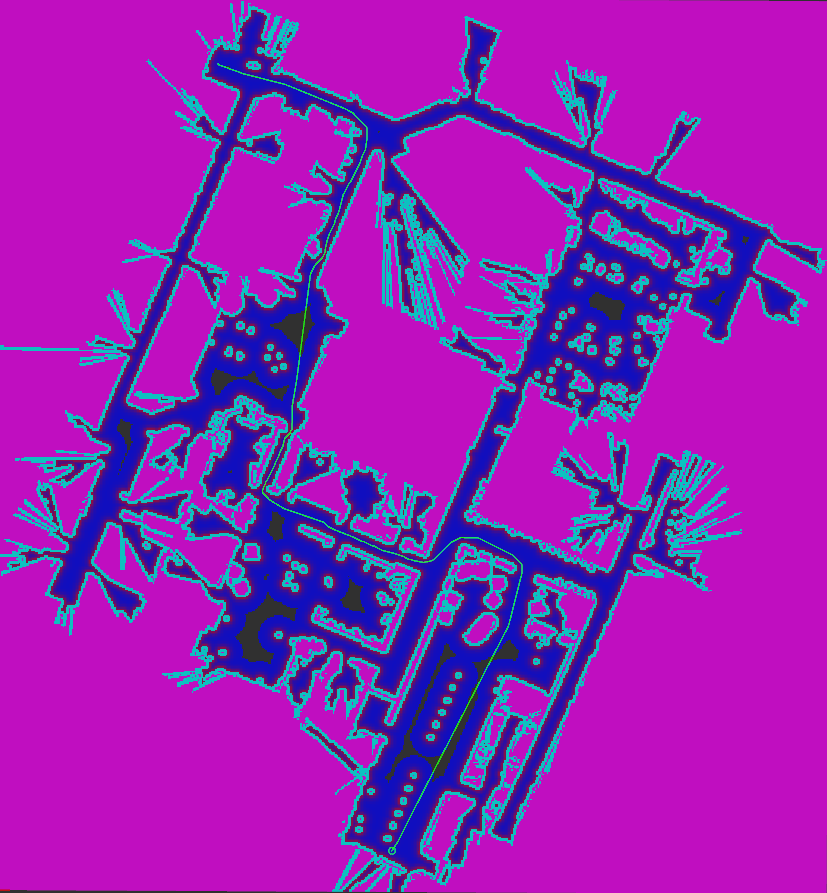 Symbols and their meanings

h(a) - heuristic function cost for the node 'a'

LETHAL_COST - a value of the costmap traversal cost that inscribes an obstacle with respect to a function, value = 253

neigh - one of the neighboring nodes of curr

euc_cost(a,b) - euclidean distance between the node type 'a' and type 'b'

Because of how the program works when the 'neigh' init_rclcpp is to be expanded, depending on the result of the LOS check, (if the LOS check returns true) the value of g(neigh) might change to g(par) + w1*euc_cost(par, neigh) + w2*(costmap(par,neigh)/LETHAL_COST)^2

The parameters of the planner are : - .how_many_corners : to choose between 4-connected and 8-connected graph expansions, the accepted values are 4 and 8 - .w_euc_cost : weight applied on the length of the path. - .w_traversal_cost : it tunes how harshly the nodes of high cost are penalised. From the above g(neigh) equation you can see that the cost-aware component of the cost function forms a parabolic curve, thus this parameter would, on increasing its value, make that curve steeper allowing for a greater differentiation (as the delta of costs would increase, when the graph becomes steep) among the nodes of different costs. Below are the default values of the parameters :

Before starting off, do note that the costmap_cost(curr,neigh) component after being operated (ie before being multiplied to its parameter and being substituted in g(init_rclcpp)) varies from 0 to 1.

This planner uses the costs associated with each cell from the global_costmap as a measure of the point's proximity to the obstacles. Providing a gentle potential field that covers the entirety of the region (thus leading to only small pocket like regions of cost = 0) is recommended in order to achieve paths that pass through the middle of the spaces. A good starting point could be to set the inflation_layer's parameters as - cost_scaling_factor: 10.0, inflation_radius: 5.5 and then decrease the value of cost_scaling_factor to achieve the said potential field.

Providing a gentle potential field over the region allows the planner to exchange the increase in path lengths for a decrease in the accumulated traversal cost, thus leading to an increase in the distance from the obstacles. This around a corner allows for naturally smoothing the turns and removes the requirement for an external path smoother.

w_heuristic_cost is an internal setting that is not user changable. It has been provided to have an admissible heuristic, restricting its value to the minimum of w_euc_cost and 1.0 to make sure the heuristic and travel costs are admissible and consistent.

To begin with, you can set the parameters to its default values and then try increasing the value of w_traversal_cost to achieve those middling paths, but this would adversly make the paths less taut. So it is recommend ed that you simultaneously tune the value of w_euc_cost. Increasing w_euc_cost increases the tautness of the path, which leads to more straight line like paths (any-angled paths). Do note that the query time from the planner would increase for higher values of w_traversal_cost as more nodes would have to be expanded to lower the cost of the path, to counteract this you may also try setting w_euc_cost to a higher value and check if it reduces the query time.

Also note that changes to w_traversal_cost might cause slow downs, in case the number of node expanisions increase thus tuning it along with w_euc_cost is the way to go to.

While tuning the planner's parameters you can also change the inflation_layer's parameters (of the global costmap) to tune the behavior of the paths.

Because of how the cost function works, the output path has a natural tendency to form smooth curves around corners, though the smoothness of the path depends on how wide the turn is, and the number of cells in that turn.

This planner is recommended to be used with local planners like DWB or TEB (or other any local planner / controllers that form a local trajectory to be traversed) as these take into account the abrupt turns which might arise due to the planner not being able to find a smoother turns owing to the aforementioned reasons.

While smoother paths can be achieved by increasing the costmap resolution (ie using a costmap of 1cm resolution rather than a 5cm one) it is not recommended to do so because it might increase the query times from the planner. Test the planners performance on the higher cm/px costmaps before making a switch to finer costmaps.

When to use this planner?

This planner could be used in scenarios where planning speed matters over an extremely smooth path, which could anyways be handled by using a local planner/controller as mentioned above. Because of the any-angled nature of paths you can traverse environments diagonally (wherever it is allowed, eg: in a wide open region). Another use case would be when you have corridors that are misaligned in the map image, in such a case this planner would be able to give straight-line like paths as it considers line of sight and thus avoid giving jagged paths which arises with other planners because of the finite directions of motion they consider.