This package is a fork of the popular tum_ardrone package. Currently, the changes are:

This package contains the implementation corresponding to the following publications:

You can find a video on youtube. This Package builds on the well known monocular SLAM framework PTAM presented by Klein & Murray in their paper at ISMAR07. Please study the original PTAM website and the corresponding paper for more information on this part of the software. Also, be aware of the license that comes with it.

The code works for both the AR.Drone 1.0 and 2.0, the default-parameters however are optimized for the AR.Drone 2.0 by now.

Estimates the drone's position based on sent navdata, sent control commands and PTAM.

IMPORTANT: requires messages to be sent on both /ardrone/navdata (>100Hz) and /ardrone/image_raw (>10Hz), i.e. a connected drone with running ardrone_autonomy node, or a .bag replay of at least those two channels. ardrone_autonomy should be started with:

To properly estimate PTAM's scale, it is best to fly up and down a little bit (e.g. 1m up and 1m down) immediately after initialization. There are two windows, one shows the video and PTAM's map points, the other one the map. To issue key commands, focus the respective window and hit a key. This generates a command on /uga_tum_ardrone/com, which in turn is parsed and does something. 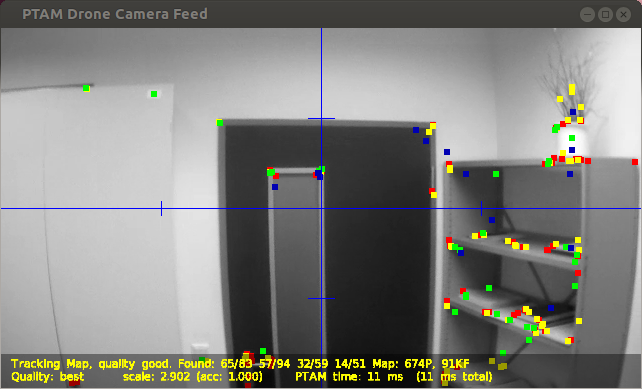 Clicking on the video window will generate waypoints, which are sent to drone_autopilot (if running): - left-click: fly (x,y,0)m relative to the current position. image-center is (0,0), borders are 2m respectively. - right-click: fly (0,0,y)m and rotate yaw by x degree. image-center is (0,0), borders are 2m and 90 degree respectively. 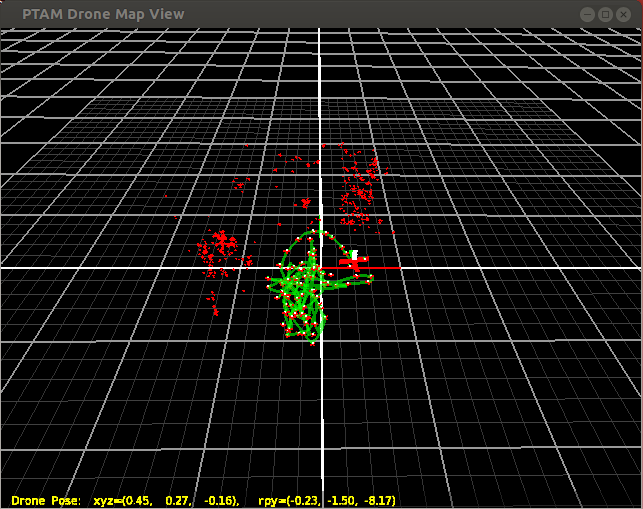 Critically damped spring based controller for the drone (see: Wikipedia: Damping ). Also includes basic way-point-following and automatic initialization. Requires drone_stateestimation to be running. The target is set via the /uga_tum_ardrone/com topic.

Two dimensions (Yaw and Z) can be controlled directly by the drone's motors. The other two (X and Y) are controlled by the drone "leaning" in that direction, which complicates control slightly. The damped springs provide a target force that the drone tries to generate with its motors and leaning, while still maintaining it's altitude.

The behavior of the autopilot is set by sending commands on /uga_tum_ardrone/com of the form "c COMMAND". A Queue of commands is kept, and as soon as one command is finished (for example a way point reached), the next command is popped. The queue can be cleared by sending "c clearCommands". Commands can be sent using the drone_gui node. Some example scripts can be found in /flightPlans/*.txt. Possible commands are:

This node offers a simple QT GUI to control the drone_autopilot node, the drone_stateestimation node and fly the drone manually via keyboard or joystick. 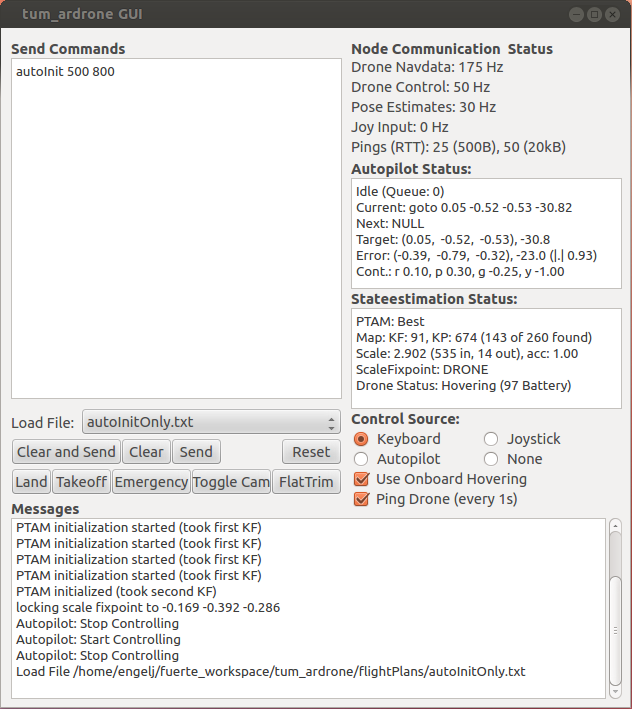 On the top-right, the current publish-frequency of important topics is displayed: - Drone Navdata: monitors /ardrone/navdata. Should be around 150 to 200Hz with a connected drone, and running (and correctly configured) ardrone_autonomy node. - Drone Control: monitors /cmd_vel. This is the frequency of how often control commands are published (and sent to the drone). - Pose Estimates: monitors /ardrone/predictedPose. These are the state predictions generated by the drone_stateestimation node. By default, this should be 30Hz. - Joy Input: monitors /joy. If you have a connected game-pad and running joy_node, this should be different from 0Hz. - Pings (RTT): current wireless LAN latency (RTT in ms) for 500B and 20kB packages. If these are too high, reduce Wlan clutter.

Manual or joystick control of the drone.

The current control source has to be set (i.e. joystick or KB). The autopilot is only allowed to send control commands, if this is set to autopilot.

calibrate with ethzasl_ptam. to work with colored images, in src/CameraCalibrator.cc change: - add #include

The major part of this software package - that is everything except PTAM - is licensed under the GNU General Public License Version 3 (GPLv3), see http://www.gnu.org/licenses/gpl.html. PTAM (comprised of all files in /src/stateestimation/PTAM) has it's own licence, see http://www.robots.ox.ac.uk/~gk/PTAM/download.html. This licence in particular prohibits commercial use of the software.