A package that manages information about targets in a swarm of cyber physical systems (CPSs).

This package manages information about targets in a swarm of cyber physical systems (CPSs).

This package depends on the following message definitions: * geometry_msgs * cpswarm_msgs

The following packages of the swarm functions library are required: * task_allocation

The following packages of the sensing and actuation library are required: * *_pos_provider

to launch the target_monitor node.

The launch file can be configured with following parameters: * id (integer, default: 1) The identifier (ID) of the CPS used for name spacing in simulation. * output (string, default: screen) Whether to show the program output (screen) or to write it to a log file (log).

The target_monitor node keeps track of targets and their positions that are being detected by CPSs in the swarm. They are typically detected by a camera. Each target has a unique numeric ID assigned to it which should be a positive integer. Targets that are detected locally by this CPS are reported through the target_tracking topic. It contains the offset between the current position and the target position in form of a transform. This information can either originate from another node or, if simulation is set to true, from this node. In the latter case, the target detection is triggered according to the current position of the CPS and the coordinates given in the targets.yaml parameter file. Targets that are being managed have a certain state associated to them. This is depicted by the following diagram where the transitions are labled with incoming event / outgoing event: 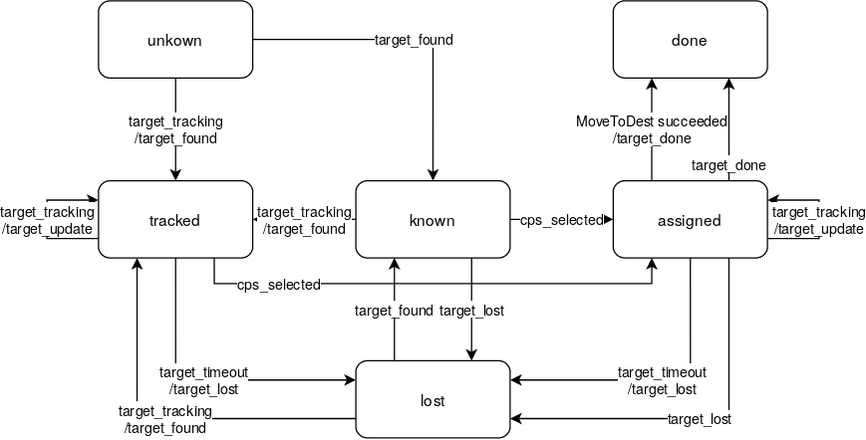 The state of the target changes depending on local and remote events that are exchanged between CPSs through the CPSwarm Communication Library.