Universal Robots have become a dominant supplier of lightweight, robotic manipulators for industry, as well as for scientific research and education. The Robot Operating System (ROS) has developed from a community-centered movement to a mature framework and quasi standard, providing a rich set of powerful tools for robot engineers and researchers, working in many different domains. 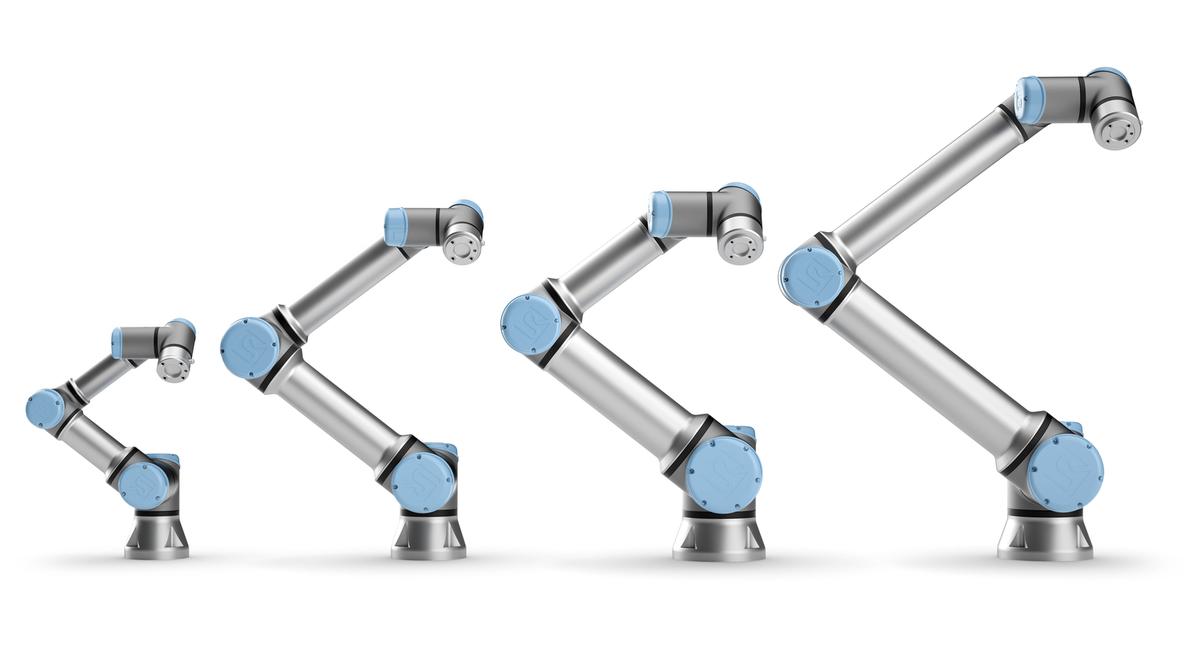 With the release of UR’s new e-Series, the demand for a ROS driver that supports the new manipulators and the newest ROS releases and paradigms like ROS-control has increased further. The goal of this driver is to provide a stable and sustainable interface between UR robots and ROS that strongly benefit all parties.

It is the core value of Universal Robots, to empower people to achieve any goal within automation. The success criteria of this driver release is to follow this vision, by providing the ROS community with an easy to use, stable and powerful driver, that empowers the community to reach their goals in research and automation without struggling with unimportant technical challenges, instability or lacking features.

This driver is forked from the ur_modern_driver.

Developed in collaboration between:

This project has received funding from the European Union’s Horizon 2020
research and innovation programme under grant agreement no. 732287.

How to report an issue

Before creating an issue, please have a look at the Troubleshooting section of this document.

To create an issue on the Issue Board please use the default template.

How to get help

If you need help using this driver, please see the ROS-category in the UR+ Developer Forum.

Please see the external feature list for a listing of all features supported by this driver.

This repository contains the new ur_robot_driver and a couple of helper packages, such as:

This driver requires a system setup with ROS. It is recommended to use Ubuntu 18.04 with ROS melodic, however using Ubuntu 20.04 with ROS noetic should also work.

To make sure that robot control isn't affected by system latencies, it is highly recommended to use a real-time kernel with the system. See the real-time setup guide on information how to set this up.

See #97 for details on using the latest upstream develop branch of ros_industrial/universal_robot which includes gazebo support for the ur16e, but no working MoveIt! support at the time of writing.

Note: The driver consists of a C++ library that abstracts the robot's interfaces and a ROS driver on top of that. As the library can be built without ROS support, it is not a catkin package and therefore requires a different treatment when being built inside the workspace. See The alternative build method below if you'd like to build the library from source.

If you would like to also build the library from source, clone the library into your workspace, as well and build it using either catkin_make_isolated or catkin build.

Setting up a UR robot for ur_robot_driver

For using the ur_robot_driver with a real robot you need to install the externalcontrol-x.x.x.urcap which can be found here.

Note: For installing this URCap a minimal PolyScope version of 3.7 or 5.1 (in case of e-Series) is necessary.

For installing the necessary URCap and creating a program, please see the individual tutorials on how to setup a CB3 robot or how to setup an e-Series robot.

For using the driver make sure it is installed (either by the debian package or built from source inside a catkin workspace).

Each UR robot is calibrated inside the factory giving exact forward and inverse kinematics. To also make use of this in ROS, you first have to extract the calibration information from the robot.

Though this step is not necessary to control the robot using this driver, it is highly recommended to do so, as otherwise endeffector positions might be off in the magnitude of centimeters.

For this, there exists a helper script:

For the parameter robot_ip insert the IP address on which the ROS pc can reach the robot. As target_filename provide an absolute path where the result will be saved to.

We recommend keeping calibrations for all robots in your organization in a common package. See the package's documentation for details.

Once the driver is built and the externalcontrol URCap is installed on the robot, you are good to go ahead starting the driver. (Note: We do recommend, though, to extract your robot's calibration first.)

If you calibrated your robot before, pass that calibration to the launch file:

If the parameters in that file don't match the ones reported from the robot, the driver will output an error during startup, but will remain usable.

For more information on the launch file's parameters see its own documentation.

Once the robot driver is started, load the previously generated program on the robot panel that will start the External Control program node and execute it. From that moment on the robot is fully functional. You can make use of the Pause function or even Stop (:stop_button:) the program. Simply press the Play button (:arrow_forward:) again and the ROS driver will reconnect.

Inside the ROS terminal running the driver you should see the output Robot ready to receive control commands.

To control the robot using ROS, use the action server on

Use this with any client interface such as MoveIt! or simply the rqt_joint_trajectory_controller gui:

You may need to install rqt_joint_trajectory_controller by running:

where ROS-DISTRO will be replaced with your version of ROS.

For a more elaborate tutorial on how to get started, please see the usage example.

If you prefer decoupling loading the robot description and starting the driver, you can start the ur_control.launch launchfile directly after the robot_description has been uploaded to the parameter server.

This section will cover some previously raised issues.

I started everything, but I cannot control the robot.

The External Control program node from the URCap is not running on the robot. Make sure to create a program containing this node on the robot and start it. Inside the ROS terminal you should see the output Robot ready to receive control commands.

Note: When interacting with the teach pendant, or sending other primary programs to the robot, the program will be stopped. On the ROS terminal you will see an output Connection to robot dropped, waiting for new connection. In those cases, restart program execution (e.g. by pressing the play button on the TP, or calling rosservice call /ur_hardware_interface/dashboard/play as explained here and here).

In general, make sure you've completed the following tasks:

When starting the program on the TP, I get an error "The connection to the remote PC could not be established"

Make sure, the IP address setup is correct, as described in the setup guides (CB3 robots, e-Series robots)

Note: This error can also show up, when the ROS driver is not running.

When starting the program on the TP, I get a C207A0 error.

Note: With the current driver version this issue can only happen when the fieldbus is enabled after the ROS driver has been started. Otherwise you will run into #204 when starting the driver with an enabled EtherNet/IP fieldbus.

When starting the driver, it crashes with Variable 'speed_slider_mask' is currently controlled by another RTDE client

Probably, you are running into #204. Currently, this driver cannot be used together with an enabled EtherNet/IP fieldbus. Disable EtherNet/IP to workaround this error. #204 contains a guide how to do this.

This is a known issue and unfortunately we don't have a solution for this. The Nvidia kernel module seems to not compile with every kernel. We recommend to use a multi-machine ROS setup in this situation where a realtime-system is running the robot driver and a separate machine is performing the computations requiring the graphics card.

Why can't the driver use the extracted calibration info on startup?

This is mainly because parameters are loaded onto the parameter server before any nodes are started.

The robot_description concept inside ROS is not designed to be changed while a system is running. Consumers of the urdf/robot_description (in terms of other ROS nodes) will not update the model they have been loading initially. While technically the robot_description parameter could be altered during runtime and any node that is started afterwards would see the updated model, this would lead to an inconsistent application state (as some nodes will use the old model, while others use the updated one). In other words: It's not the driver that needs/benefits from this calibrated urdf, it's the rest of the ROS application and that will only see it if the calibrated version is present on the parameter server before nodes are started.

Additionally: If the calibration stored on the ROS side doesn't match the one of the robot controller, there's a good chance there is a reason for this and it would be better to make updating it a conscious decision by a human (as the driver would not know when updating the model would be convenient or safe). Having to run the calibration extraction/transformation as a separate step makes this possible and doesn't hide this step from the end user.

Can this driver be used inside a combined hardware interface?

Yes, this is possible. However, if used inside a combined HW interface we recommend to enable non-blocking read functinality.

On the e-Series the robot has to be in remote control mode to accept script code from an external source. This has to be switched from the Teach-Pendant.

On the e-Series the robot has to be in remote control mode to accept certain calls on the dashboard server. See Available dashboard commands for details.

Passthrough controllers: The robot does not fully reach trajectory points even though I have specified the path tolerance to be 0

If you are using a control modes that forwards trajectories to the robot, currently the path tolerance is ignored. The corresponding interface on the robot and client-library level exists in the form of a "blend radius", but is not utilized by this ROS driver. For more information see this issue.

Can I use the Cartesian controllers together with MoveIt!?

Not directly, no. MoveIt! plans a Cartesian path and then creates a joint trajectory out of that for execution, as the common interface to robot drivers in ROS is the FollowJointTrajectory action.

For supporting Cartesian controllers inside MoveIt! changes would have to be made to MoveIt! itself.