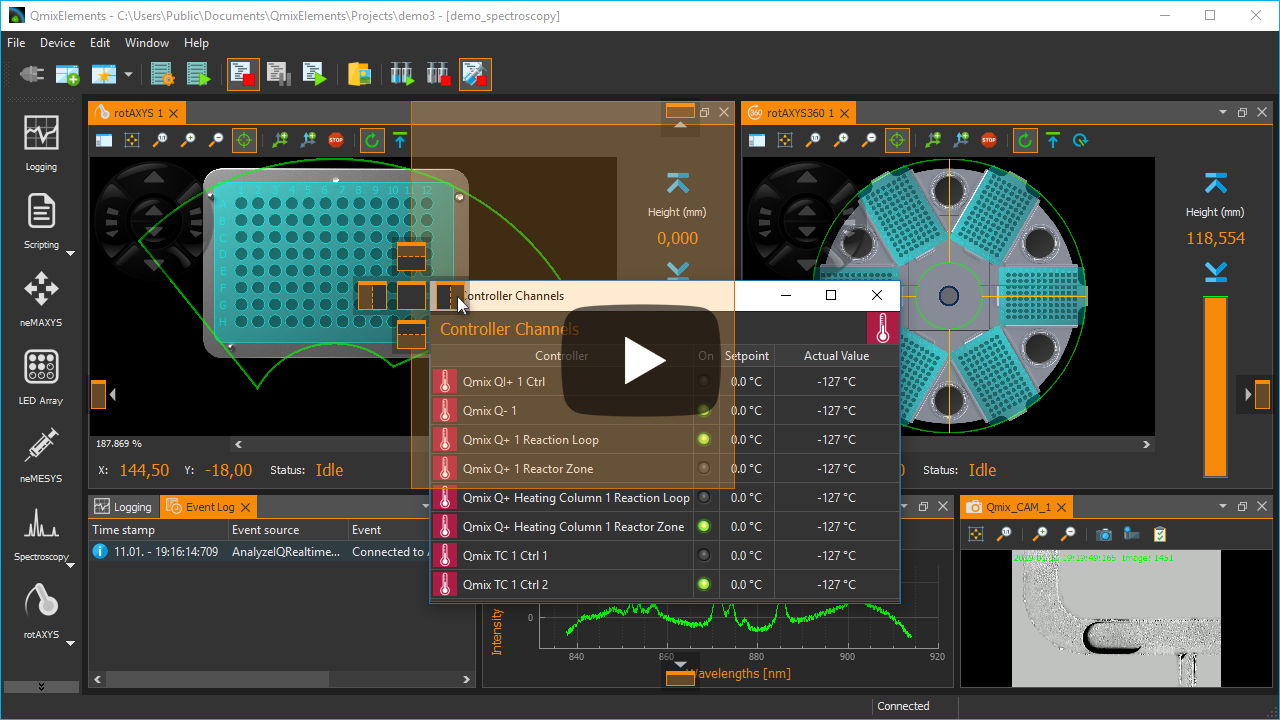 The release 3.8 adds the following features:

The release 3.7 adds the following features:

Both features are contributions from ADS users. Read the documentation to learn more about both new features.

The release 3.5 adds the new focus highlighting feature. This optional feature enables highlighting of the focused dock widget like you know it from Visual Studio.

There is no central widget like in the Qt docking system. You can dock on every border of the main window or you can dock into each dock area - so you are free to dock almost everywhere. 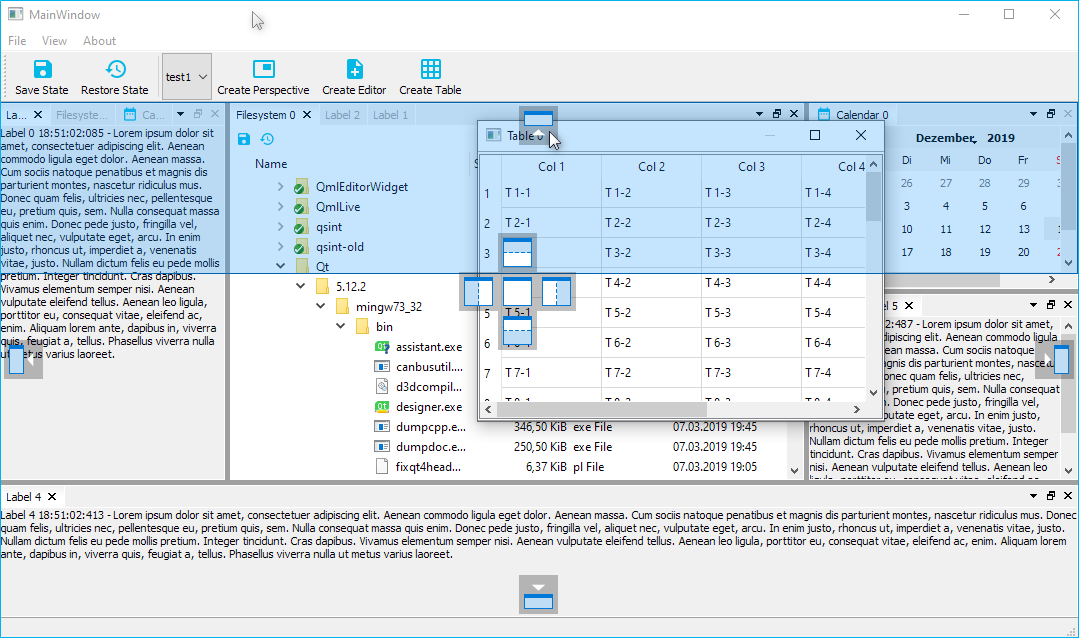 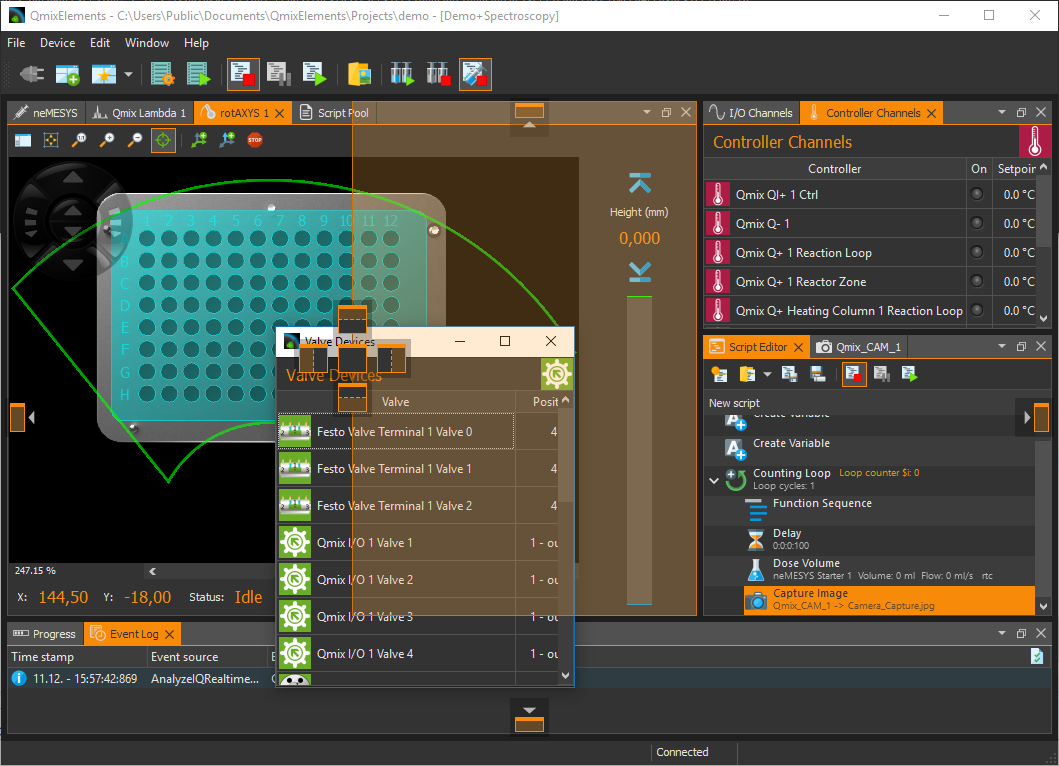 When dragging the titlebar of a dock, all the tabs that are tabbed with it are going to be dragged. So you can move complete groups of tabbed widgets into a floating widget or from one dock area to another one.

Perspectives for fast switching of the complete main window layout

The advanced docking system uses standard QSplitters as resize separators and thus supports opaque and non-opaque resizing functionality of QSplitter. In some rare cases, for very complex widgets or on slow machines resizing via separator on the fly may cause flicking and glaring of rendered content inside a widget. The global dock manager flag OpaqueSplitterResize configures the resizing behaviour of the splitters. If this flag is set, then widgets are resized dynamically (opaquely) while interactively moving the splitters.

If this flag is cleared, the widget resizing is deferred until the mouse button is released - this is some kind of lazy resizing separator.

By default, opaque undocking is active. That means, as soon as you drag a dock widget or a dock area with a number of dock widgets it will be undocked and moved into a floating widget and then the floating widget will be dragged around. That means undocking will take place immediatelly. You can compare this with opaque splitter resizing. If the flag OpaqueUndocking is cleared, then non-opaque undocking is active. In this mode, undocking is more like a standard drag and drop operation. That means, the dragged dock widget or dock area is not undocked immediatelly. Instead, a drag preview widget is created and dragged around to indicate the future position of the dock widget or dock area. The actual dock operation is only executed when the mouse button is released. That makes it possible, to cancel an active drag operation with the escape key.

The best way to test non-opaque undocking is to set the standard flags: CDockManager::setConfigFlags(CDockManager::DefaultNonOpaqueConfig).

Tab-menu for easy handling of many tabbed dock widgets

You can detach dock widgets and also dock areas in the following ways:

Normally clicking the close button of a dock widget will just hide the widget and the user can show it again using the toggleView() action of the dock widget. This is meant for user interfaces with a static amount of widgets. But the advanced docking system also supports dynamic dock widgets that will get deleted on close. If you set the dock widget flag DockWidgetDeleteOnClose for a certain dock widget, then it will be deleted as soon as you close this dock widget. This enables the implementation of user interfaces with dynamically created editors, like in word processing applications or source code development tools.

The Advanced Docking System comes with a complete Python integration based on PyQt5 bindings. The package is available via conda-forge. The python integration has been contributed to this project by the following people:

The library supports Qt5 and Qt6.

The library was developed on and for Windows. It is used in a commercial Windows application and is therefore constantly tested.

The application can be compiled for macOS. A user reported, that the library works on macOS. If have not tested it. 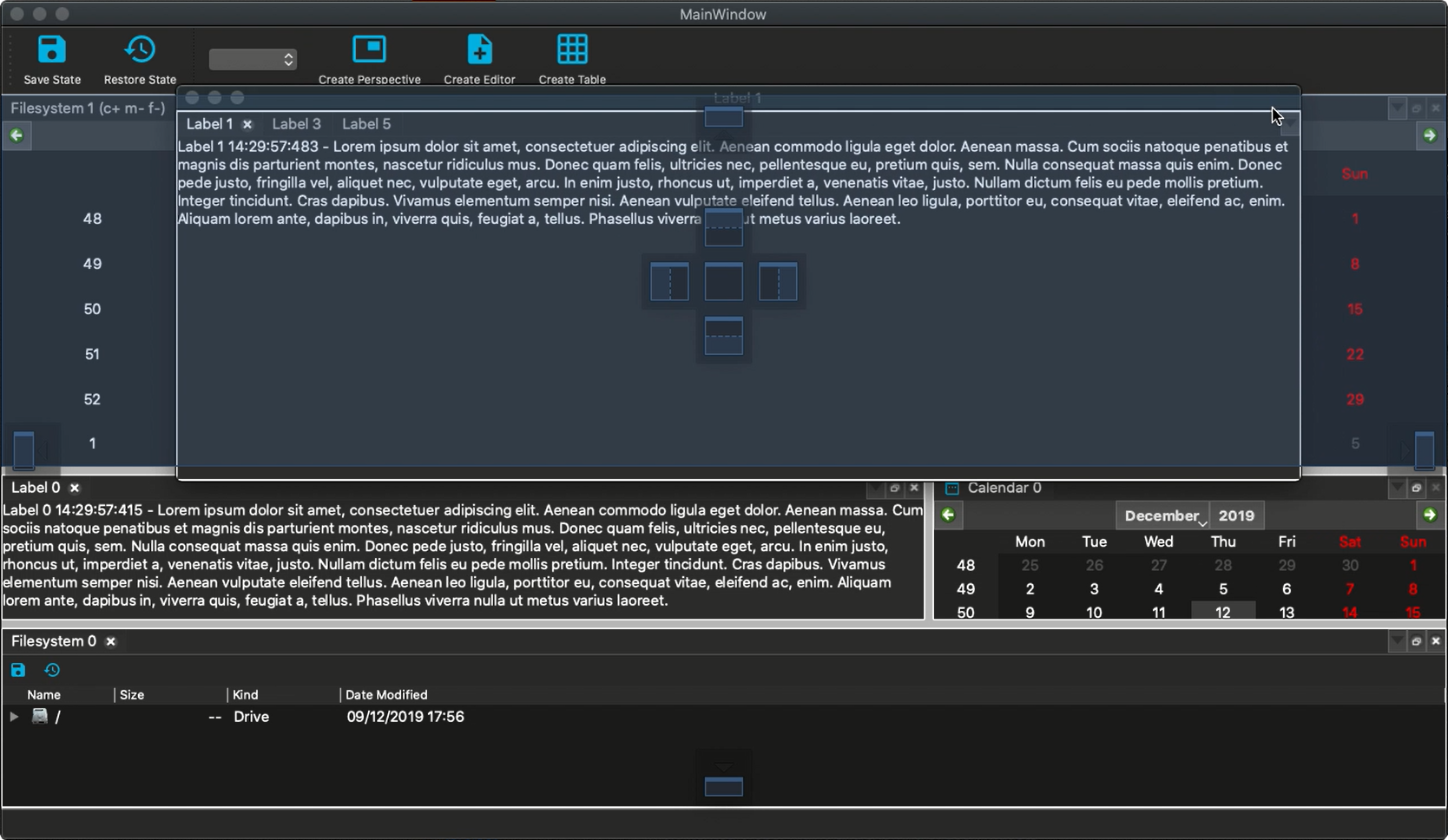 There are some requirements for the Linux distribution that have to be met: 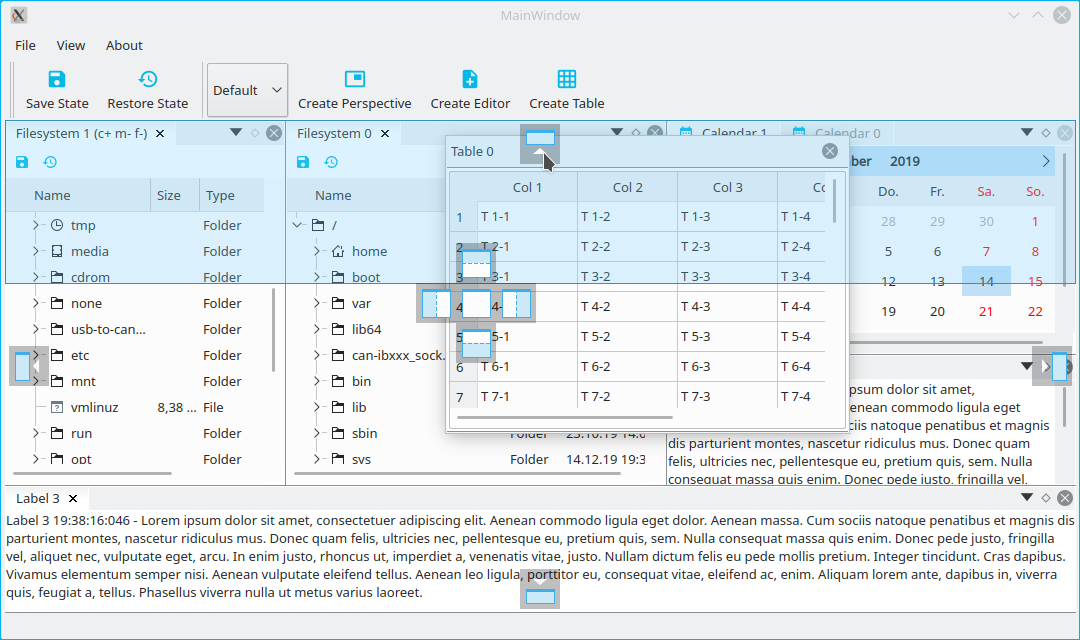 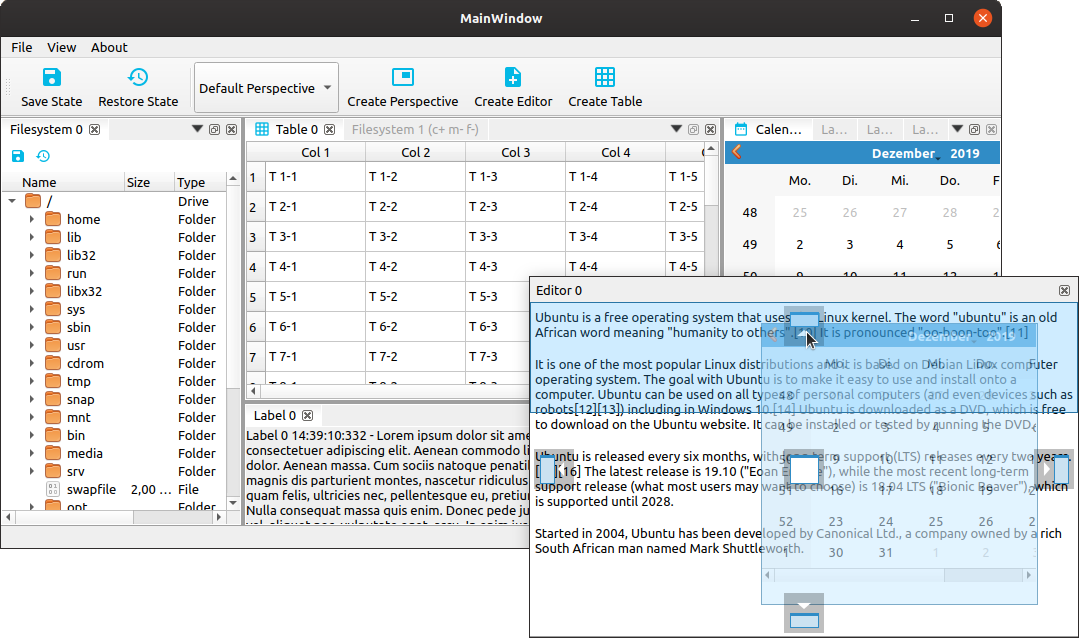 The Linux build requires private header files. Make sure that they are installed:

Open the ads.pro file with QtCreator and start the build, that's it. You can run the demo project and test it yourself.

The following example shows the minimum code required to use the advanced Qt docking system.

This work is based on and inspired by the Advanced Docking System for Qt from Manuel Freiholz. I did an almost complete rewrite of his code to improve code quality, readibility and to fix all issues from the issue tracker of his docking system project.

This project uses the LGPLv2.1 license

If this Qt Advanced Docking System does not fit to your needs you may consider some of the alternative docking system solutions for Qt.

This is an advanced docking framework for Qt from KDAB. The interesting thing is, that they separated GUI code from logic, so they can easily provide a QtQuick backend in the future.

This is a commercial component from Developer Machines for Qt Framework that allows to create a Microsoft like dockable user interface. They also offer a lot of other interesting and useful components for Qt.

If this project help you reduce time to develop or if you just like it, you can give me a cup of coffee :coffee::wink:.

From version 4.12 on, Qt Creator uses the Advanced Docking Framework for its Qt Quick Designer. This improves the usability when using multiple screens. 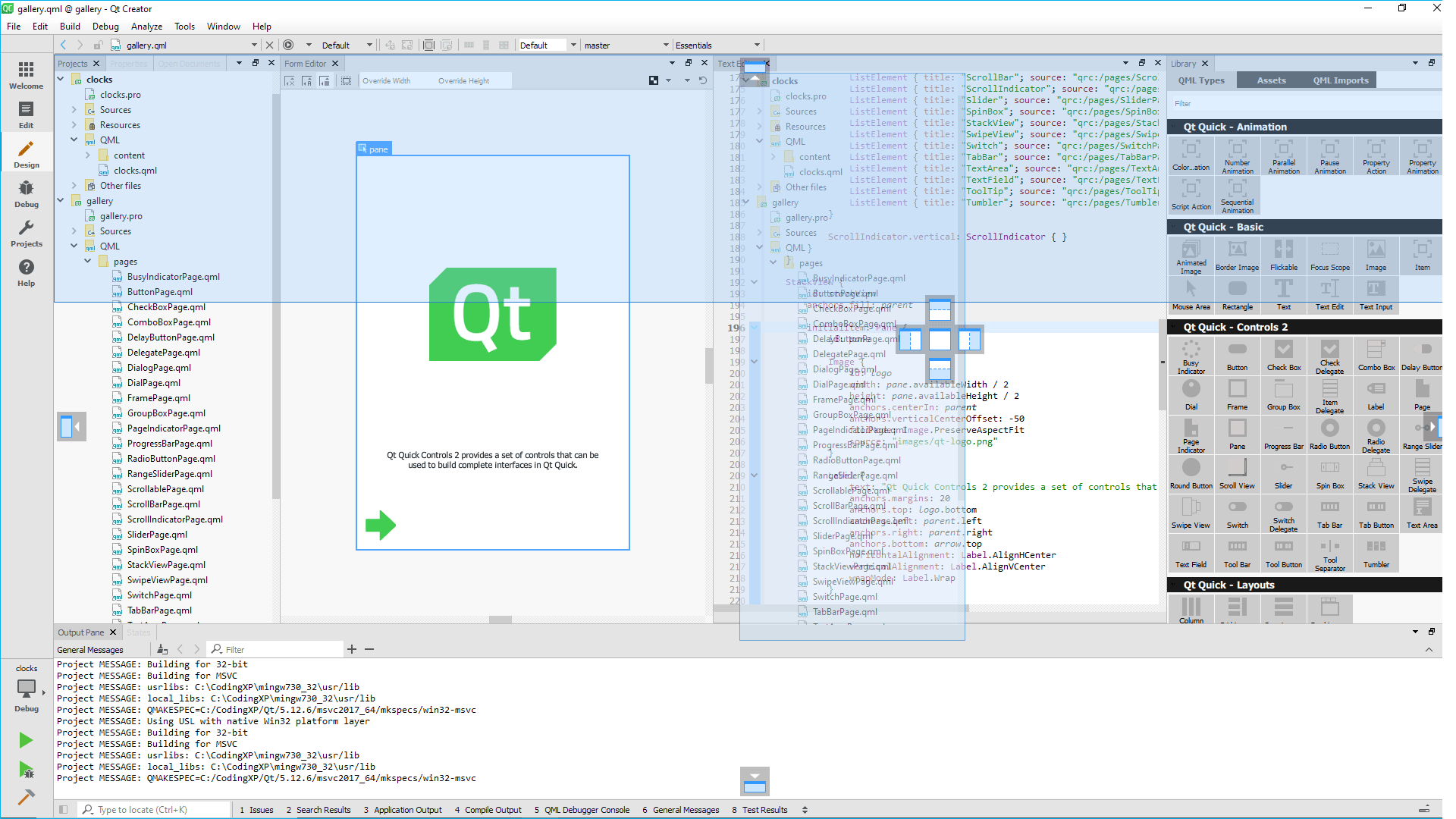 Taken from the Qt Blog:

The most obvious change in Qt Design Studio 1.5 is the integration of dock widgets using the Qt Advanced Docking System. This allows the user to fully customize the workspace and also to undock any view into its own top level window. This especially improves the usability when using multiple screens. 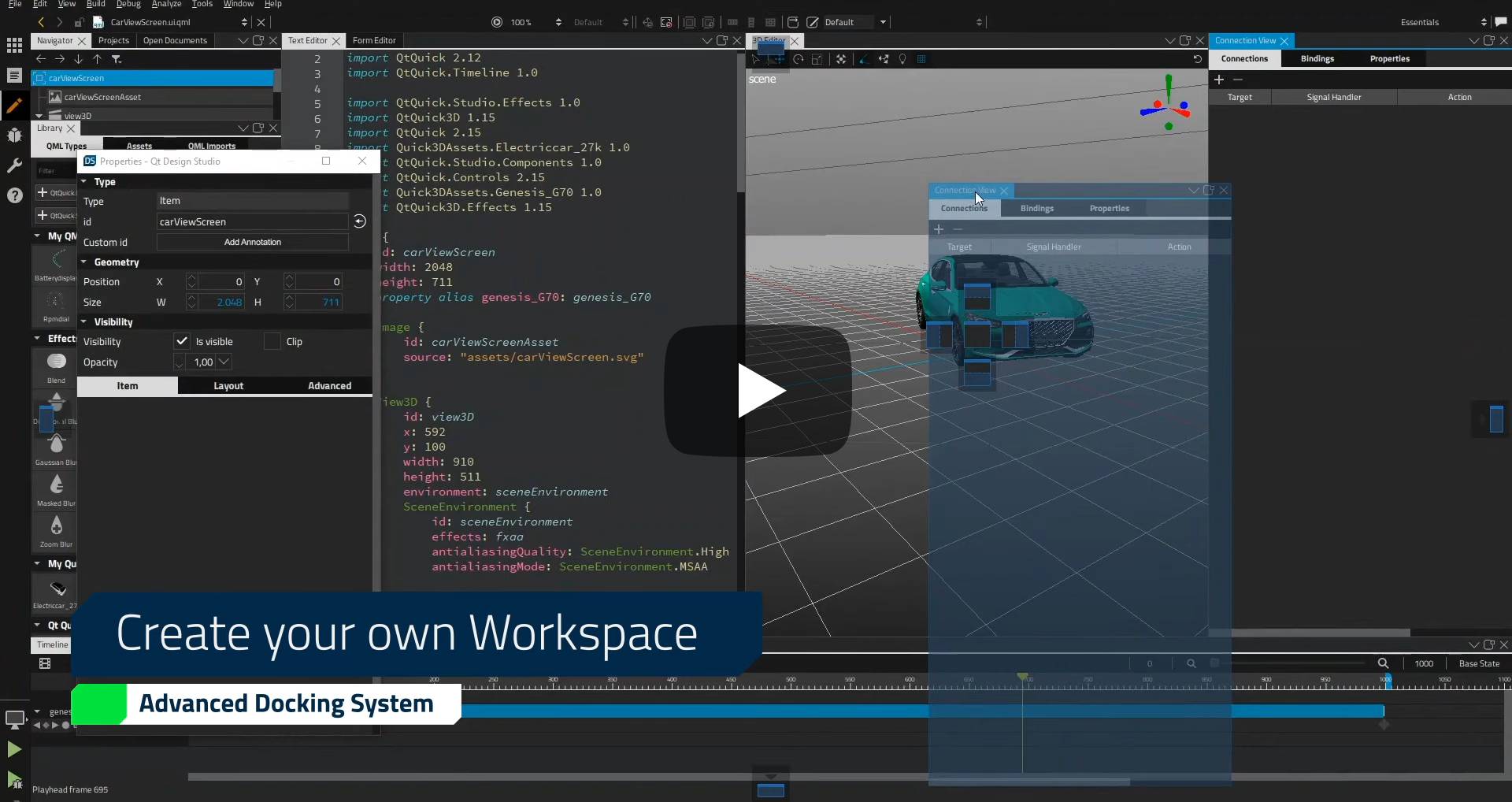 The CETONI Elements software from CETONI is a comprehensive, plugin-based and modular laboratory automation software for controlling CETONI devices using a joint graphical user interface. The software features a powerful script system to automate processes. The software uses the advanced docking system to give the user the freedom to arrange all the views and windows that are provided by the various plugins. 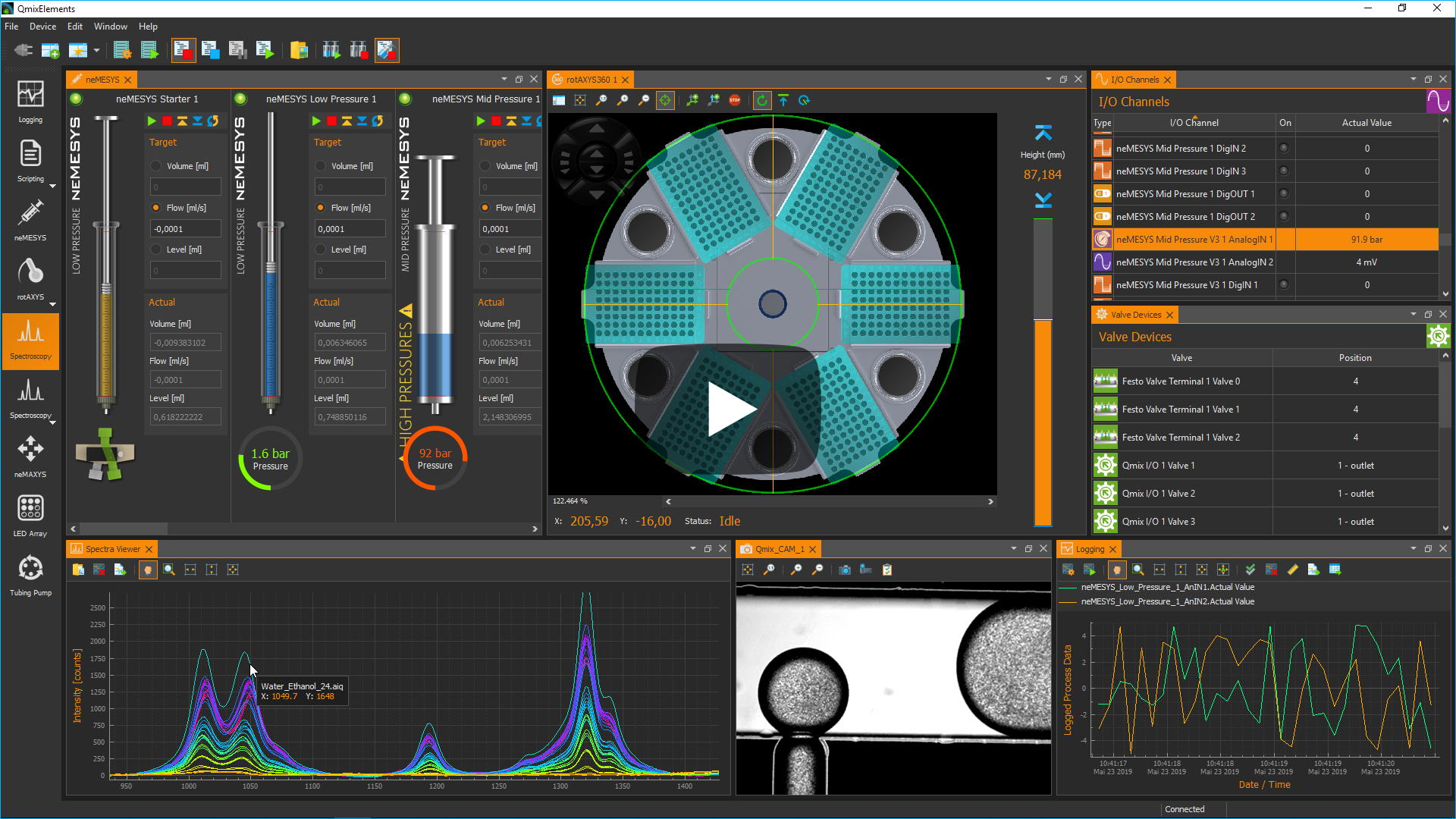 The ezEditor is a full blown graphical editor used for editing scenes and importing and authoring assets for the ezEngine - an open source C++ game engine in active development. 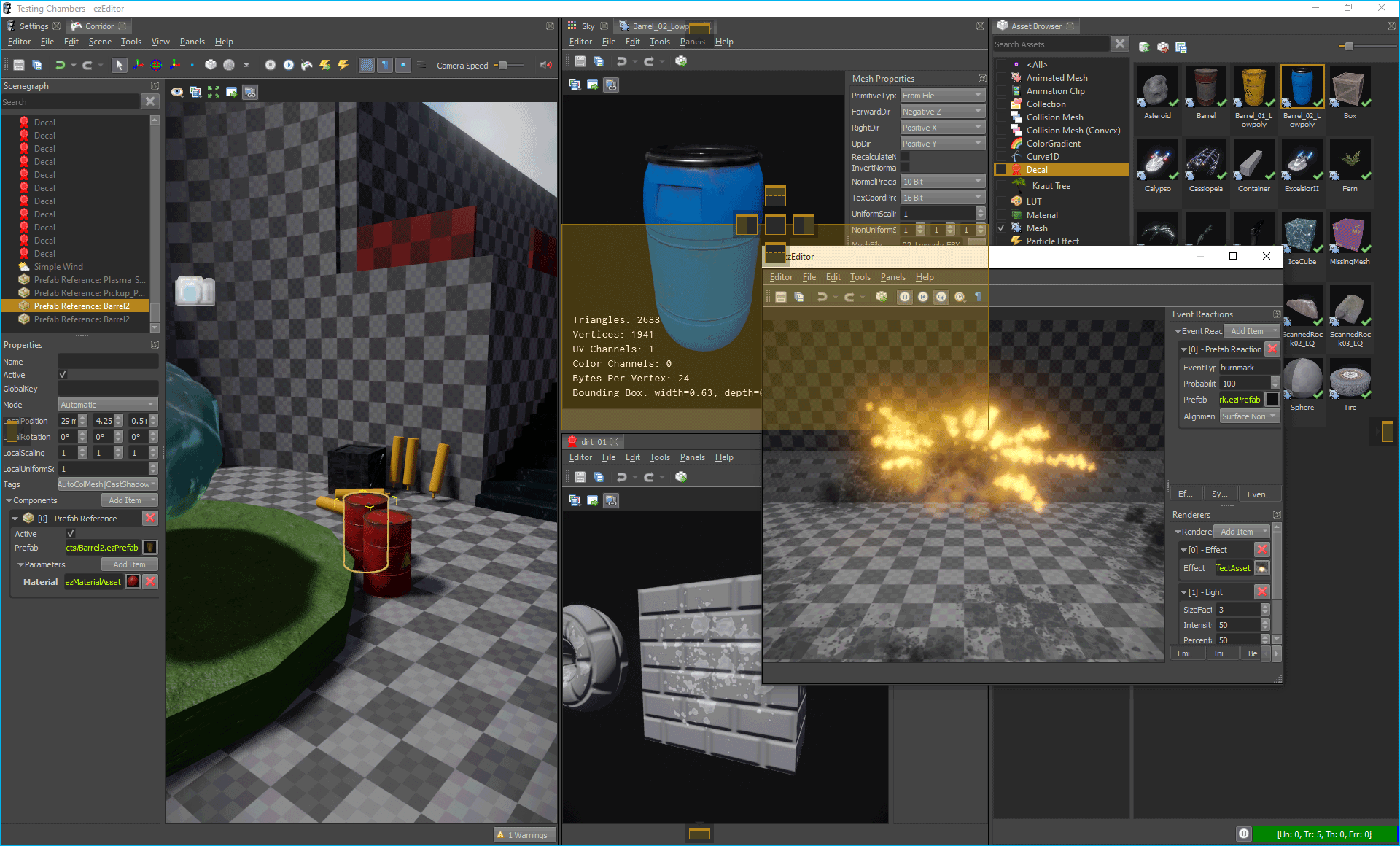 D-Tect X is a X-ray inspection software for industrial radiography. It is a state-of-the-art 64-bit application which supports GPU (Graphics Processing Unit) acceleration and takes full advantage of computers with multiple CPU cores. A large set of tools assist the user in image analysis and evaluation. Thanks to the Qt Advanced Docking System the flexible and intuitive user interface can be completely customized to each user’s preference. 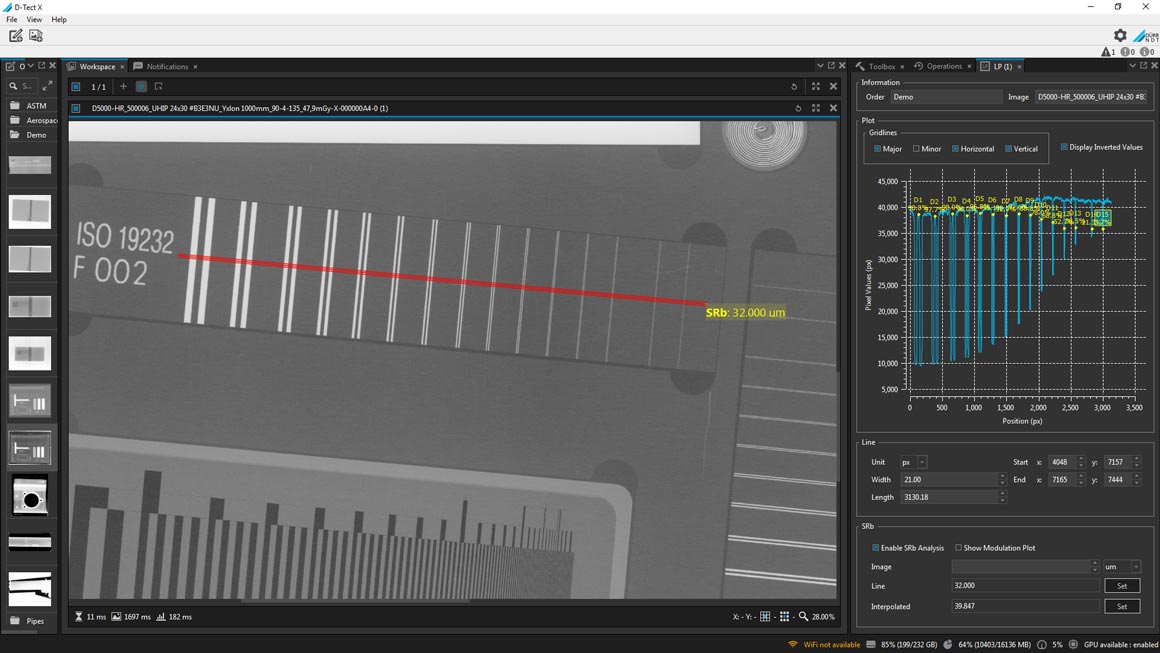 HiveWE is a Warcraft III world editor. It focusses on speed and ease of use, especially for large maps where the regular World Editor is often too slow and clunky. It has a JASS editor with syntax hightlighting, tabs, code completion and more. The JASS editor uses the Qt Advanced Docking System for the management and layout of the open editor windows. 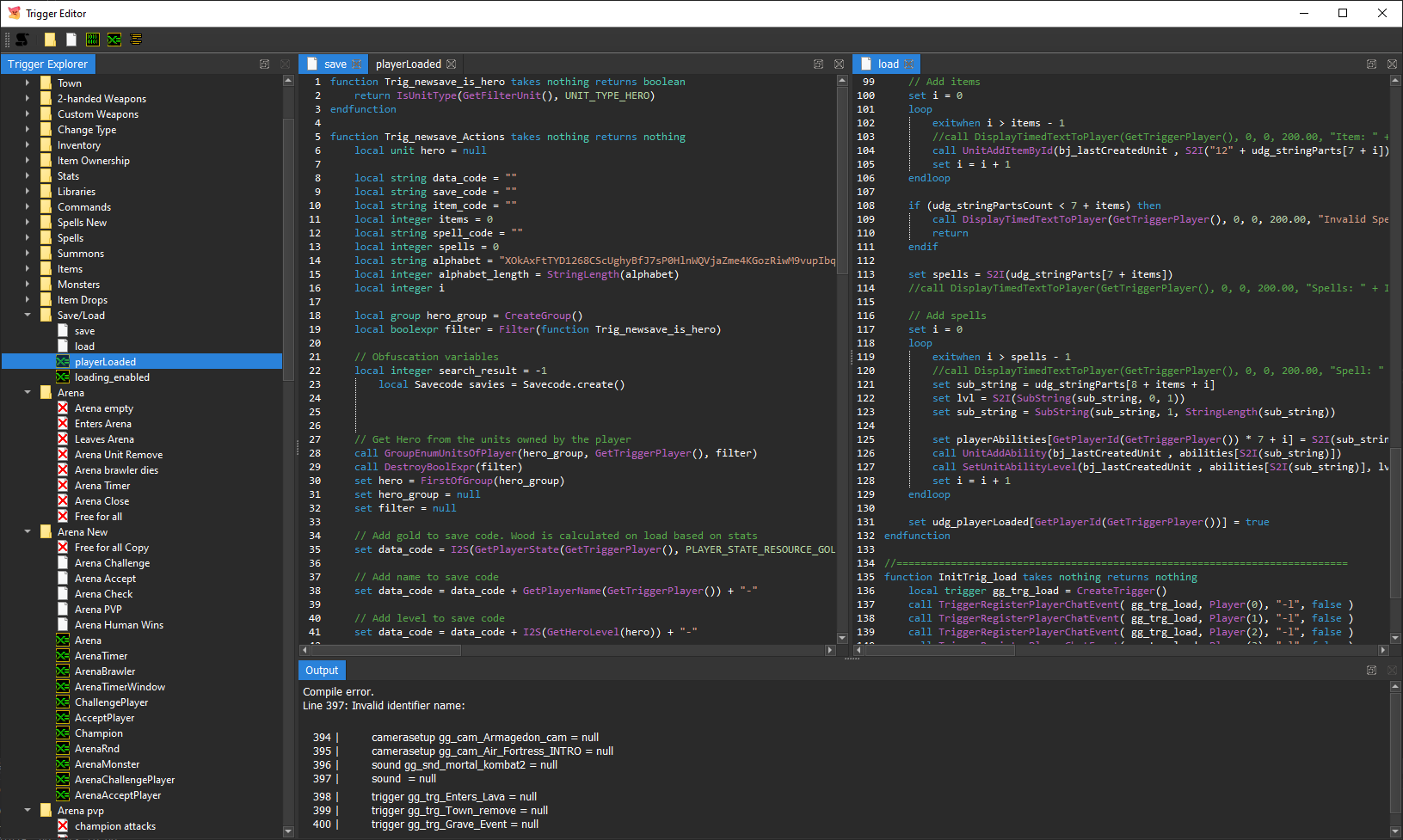 Ramses Composer is the authoring tool for the open source RAMSES rendering ecosystem.

Ramses is a low-level rendering engine which is optimized for embedded hardware mobile devices, automotive ECUs, IoT electronics. Ramses was initially developed at the BMW Group and open-sourced in 2018 as part of a collaboration initiative with the Genivi Alliance. It is an important part of the BMW infotainment cluster and digital portfolio. 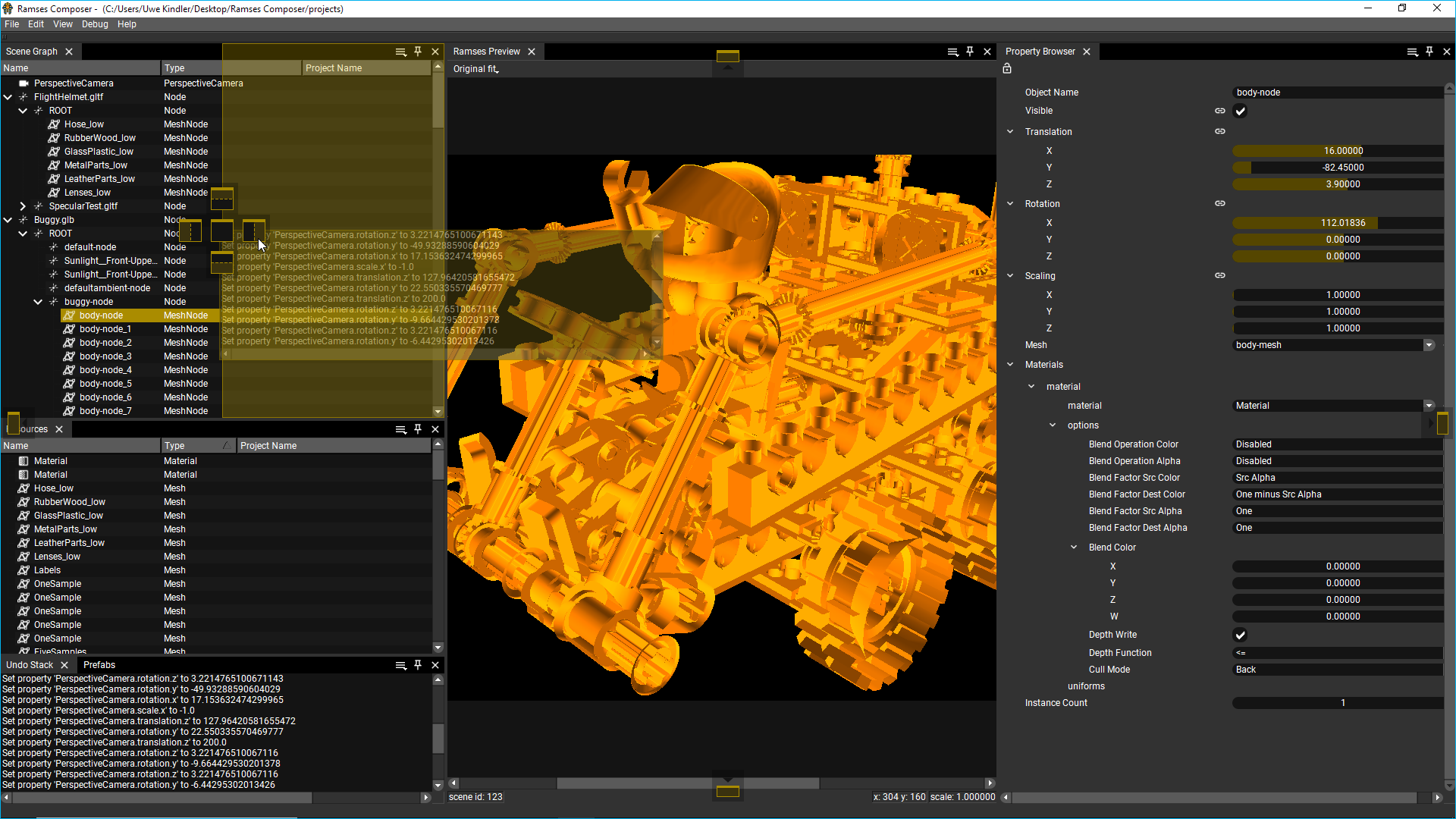 PlotJuggler is a fast, powerful and intuitive tool to visualize time series. It makes it easy to visualize data but also to analyze it. You can manipulate your time series using a simple and extendable Transform Editor. Some of the highlights are: 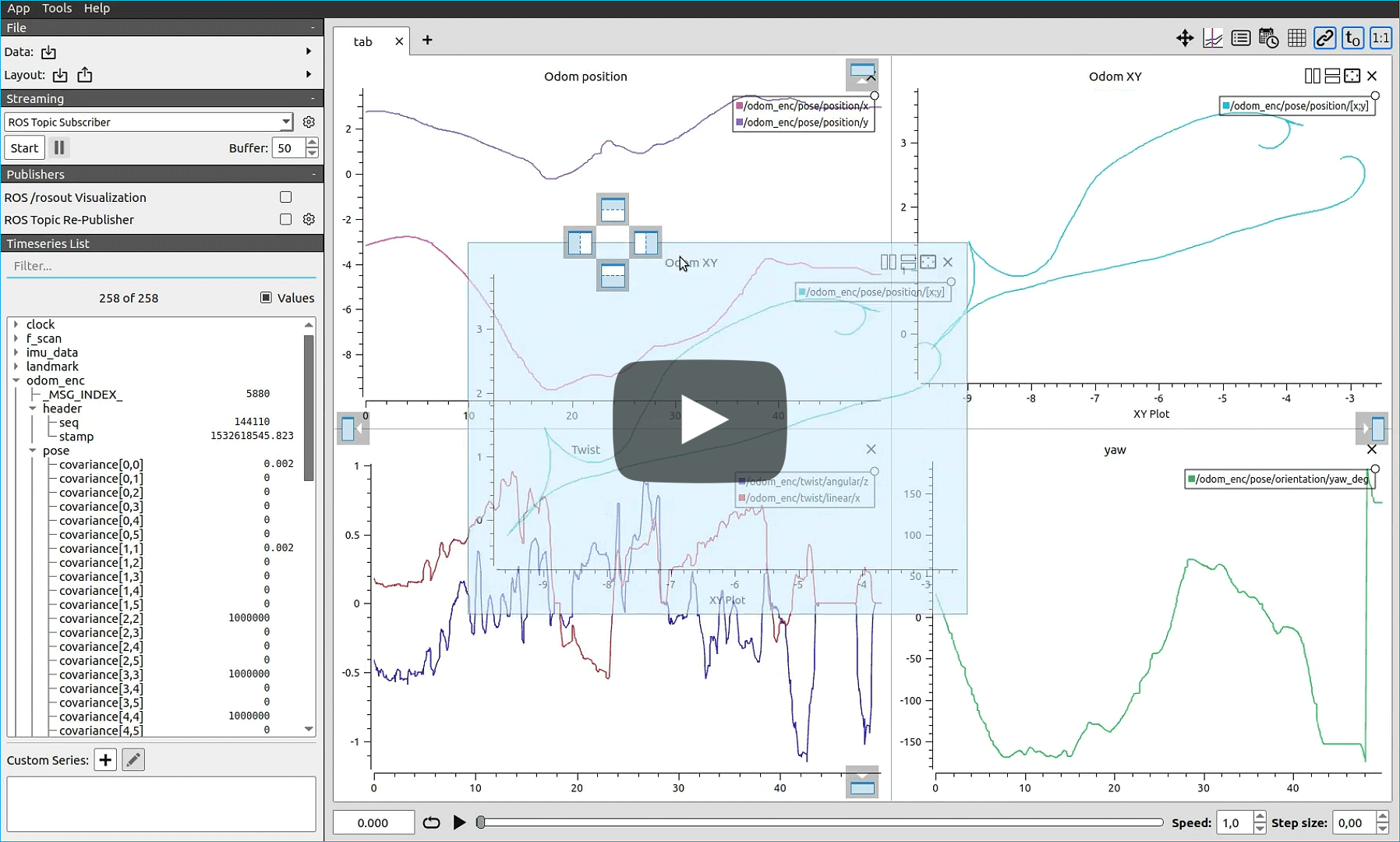 Notepad Next is a cross-platform reimplementation of Notepad++ that uses the Advanced Docking System to arrange the open source files on the screen. 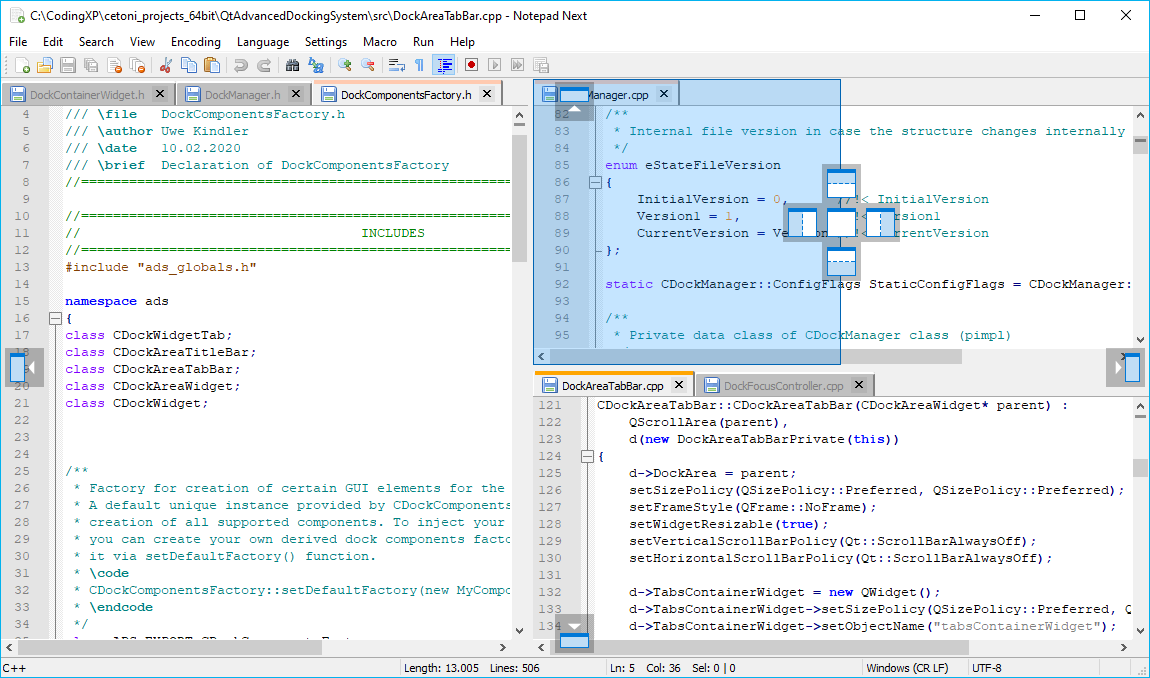 MetGem is an open-source software for tandem mass-spectrometry data visualization. It's key features are standalone molecular networking and t-SNE based projections. MetGem uses the Qt-Advanced-Docking-System to manage docks and to create independent molecular network views. 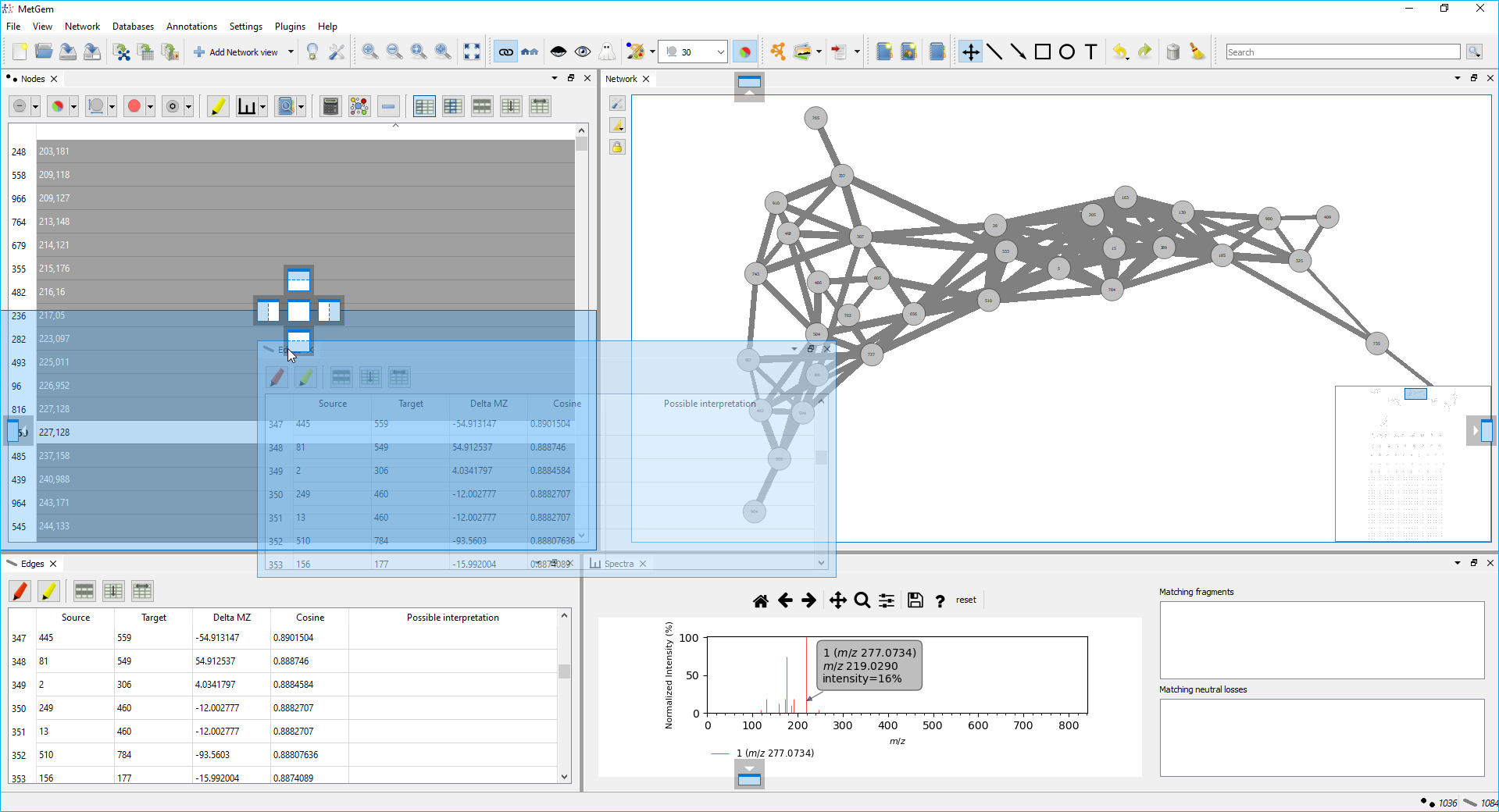