:warning: DEPRECATION NOTICE: The libo3d3xx libary has been superceded by ifm3d. Similarly, this package has been deprecated in favor of ifm3d-ros which is also available in the ROS distribution (starting with ROS Kinetic)

o3d3xx-ros is a wrapper around libo3d3xx enabling the usage of IFM Efector O3D3xx ToF cameras from within ROS software systems.

Additionally, your compiler must support C++11. This package has been validated with:

Building and Installing the Software

NOTE: Since we are talking about ROS here, we assume you are on Ubuntu Linux.

You should first ensure that you have installed ROS by following these instructions. The desktop-full installation is highly recommended.

Next, you should be sure to install libo3d3xx. This ROS package assumes you have installed libo3d3xx via the supported debian installer. Step-by-step instructions for that process are located here. If you already have libo3d3xx installed you can skip this step. However, it is important to point out that the table above denotes a software compatibility matrix and you should be sure to link o3d3xx-ros against a compatible version of libo3d3xx.

We now move on to building o3d3xx-ros.

Building and installing o3d3xx-ros is accomplished by utilizing the ROS catkin tool. There are many tutorials and other pieces of advice available on-line advising how to most effectively utilize catkin. However, the basic idea is to provide a clean separation between your source code repository and your build and runtime environments. The instructions that now follow represent how we choose to use catkin to build and permanently install a ROS package from source.

First, we need to decide where we want our software to ultimately be installed. For purposes of this document, we will assume that we will install our ROS packages at ~/ros. For convenience, we add the following to our ~/.bash_profile:

Next, we need to get the code from github. We assume we keep all of our git repositories in ~/dev.

We now have the code in ~/dev/o3d3xx-ros. Next, we want to create a catkin workspace that we can use to build and install that code from. It is the catkin philosophy that we do not do this directly in the source directory.

So, you should have a catkin workspace set up to build the o3d3xx-ros code that looks basically like:

Now we are ready to build the code.

The ROS package should now be installed in ~/ros/o3d3xx. To test everything out you should open a fresh bash shell, and start up a ROS core:

Open another shell and start the primary camera node:

NOTE: The IP address of your camera may differ. If you are using the factory default (192.168.0.69), you do not need to specify it on the above roslaunch line.

Open another shell and start the rviz node to visualize the data coming from the camera:

At this point, you should see an rviz window that looks something like: 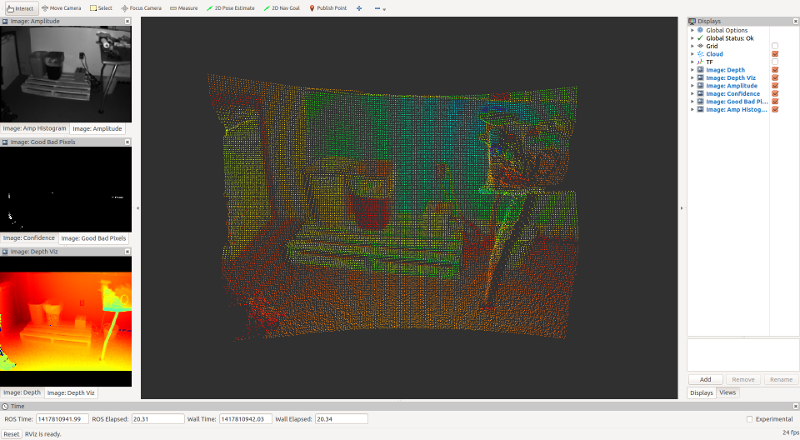 Congratulations! You can now utilize o3d3xx-ros.

This node provides a real-time feed to the camera data. This node is started from the primary camera.launch file:

The naming of the camera can be customized via the ns (namespace) and nn (node name) command line arguments passed to the camera.launch file. For example, if you specify your roslaunch command as:

The node will have the name /robot/front_camera in the ROS computation graph.

This node is of type tf/static_transform_publisher. It establishes a frame_id for the camera in the global tf tree. This node is launched from the primary camera.launch file:

When run as above, the tf publishing node would be named /o3d3xx/camera_tf and the camera coordinate frame would be o3d3xx/camera_link in the tf tree.

You can customize this naming via the frame_id_base arg or implicitly through the ns (namespace) and nn (node name) command line arguments passed to the camera.launch file. For example, if you specify your roslaunch command as:

This node is used as a proxy to simplify calling the /o3d3xx/camera/Config service offered by the /o3d3xx/camera node. It was noted above that there appears to be a limitation in the YAML parser of the ROS rosservice command line tool. Specifically, it seems that it is not capable of assigning a JSON string to a variable. This is the reason for this node. This is not a long-running node but rather works like a typical command-line tool would: you invoke it, it runs, and exits. The following command line will launch this node:

This package offers a launch script that wraps the execution of rviz so that the display will be conveniently configured for visualizing the /o3d3xx/camera data. To launch this node:

Running the command as above will color the point cloud with the data from the normalized amplitude image (i.e., the intensity).

The rviz window should look something like (assuming you are coloring the point cloud with the intensity data):

By default, it will throttle the above named topics to 1 Hz. You can change the frequency with the hz command line argument. For example, to send data at 2 Hz:

Using this launch file to launch this set of nodes is strictly optional. We have found use for it in two ways. First, to slow down the publishing frequency of the topics when used in conjunction with the /o3d3xx/camera/file_writer node for collecting data (i.e., in those instances when we really do not need all the data but rather some subsampling of it). Second, if we are running the camera on a drone (for example) that has a slower radio link down to a ground control station running rviz where we want to see what the camera sees while the drone is in flight. Clearly there are other uses for this, YMMV.

There are also a few downfalls to using JSON. Most notably the lack of comments and an enforceable schema. One could argue that the latter keeps things flexible. None-the-less, JSON is the format used by libo3d3xx and, by extension, this ROS package.

It should also be noted that any portion of the JSON tree can be specfied to configure only that part of the camera. The only rule to follow is that all keys should be fully qualified. For example, to simply set the active application, you can use a JSON snippet like this:

The above snippet is provided as an example here. To apply this to your camera, you can:

It was also noted above that the /o3d3xx/camera/config_node will read stdin by default, so you could also:

Then, open /tmp/camera.json with a text editor to create a declarative JSON configuration for your camera. You should be sure to delete the variable names from the rosservice output if you are following this example word-for-word. Additionally, you can delete any unnecessary keys if you would like, however it is not strictly necessary as the /o3d3xx/camera/Config service will leave unedited values unchanged on the camera. Once you have a configuration that you like, you can:

You can check that your configuration is active by calling the /o3d3xx/camera/Dump service again.