The ROS Anomaly Detector Module (ADM) is designed to execute alongside industrial robotic arm tasks to detect unintended deviations at the application level. The ADM utilizes a learning based technique to achieve this. The process has been made efficient by building the ADM as a ROS package that aptly fits in the ROS ecosystem. While this module is specific to anomaly detection for an industrial arm, it is extensible to other projects with similar goals. This is meant to be a starting point for other such projects. <!-- Figure \ref{fig:ros_i_overview} presents the ROS-I architecture. The red box around ROS ADM in the ROS Layer shows where the ADM exists within the ROS ecosystem. -->

The crux of anomaly detection within this module relies on a three step process. The steps includes creating datasets out of the published messages within ROS, training learning models from those datasets, and deploying it in production. Appropriately, the three modes that the ROS ADM can be executed in are Collect, Learn, and Operate. The following image presents the high level workflow that is meant to be followed. 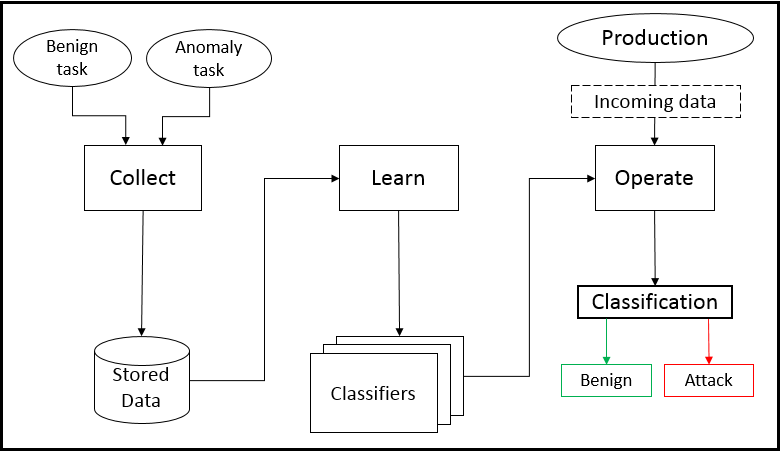 The ADM is first run in the Collect mode after the task has been programmed and assessed in the commissioning phase of the robot. This mode runs AND collects data as a node by subscribing to the '/joint_states' topic, of message type 'sensor_msgs/JointState,' within ROS.

The goal of this mode is submitting the user with trained classifiers. In order to accomplish this the user is depended on to supply not only the datasets for training, but also the classifiers of interest. These are supplied to an internal library via a script. The internal library semi-automates the learning process. Particularly, the user is only required to supply their script to the Interface component. It in turn, pre-processes the data (dimensionality reduction if specified), and the set of classifiers are all trained with their appropriate datasets. After training, the classifiers are saved in storage.

At a high level, the user's responsibilities includes writing a simple script, and supplying the names of datasets in a structured manner. From a small set of functions calls to the Interface class, the classifiers are quickly trained and are efficiently prepared for deployment. There are four key, programmatic steps to accomplish in order to get training predictions and its associated accuracies. First, the Interface class needs to be instantiated by passing a YAML input file as an argument. YAML is a human-friendly data serialization method, that is interoperable between programming languages and systems. Next, the user creates instances of the classifiers they want trained. The user then passes off the classifiers to the Interface class for training, by calling the genmodel_train() function. Lastly, testing predictions can be gathered for all classifiers, by calling get_testing_predictions() .

The following python script presents an example of a script utilizing the learning library.

The following image shows the design of the different components of the library, and how they interact with each other. 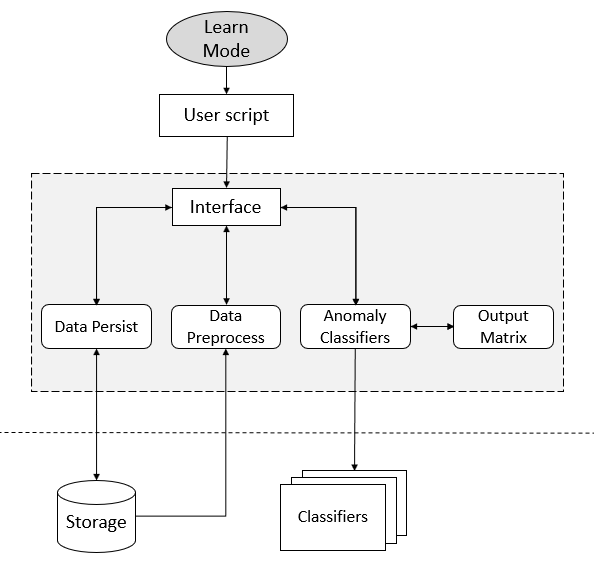 In the Operate mode, the classifier that was determined the best is put into effect as the robot is deployed to execute its task, along with the other saved preprocessing models. It is worth noting that the task the robot executes is the same one that was initially programmed in the commissioning phase. The Operate mode runs as a node, so it subscribes to the '/joint_states' topic. The data is preprocessed and fed to the determined classifier for a prediction. The user is warned of anomalous data points, and is encourages to take action when the anomaly score surpasses the threshold.

ROS needs to be first installed

setup.py should run from home directory specify the 'learn_lib' package to build within the src/ directory

The ADM can be included and initiated by placing each of the codes in the appropriate project. Items within the < > brackets need to be modified by user.

The ADM can also be initiated from the command line, following the bash command. It's important that all arguments are properly supplied.

Gotchas (Limitations and things to keep in mind)

4. ADM works in the application space, and other methods must be explored to protect lower levels as well.

2. ADM needs to be flexible to account for multiple tasks.